Camp are members of The Churches’ Child Protection Advisory Service. All leaders are required to have a Disclosure and Barring Service (DBS) check and must adhere to the CCYC child protection policy.  Nick and Sarah Williams are the Child Protection Co-ordinators and Claire Lee is their Deputy. 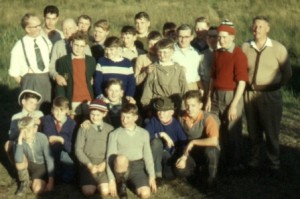 The first Camp was held in 1961 at Buttermere with 18 boys (see picture opposite). This quickly grew to 34 boys in 1962 when the Camp was held at Wasdale. The Camp moved again in 1963 to Bassenthwaite with 40 boys. In 1964 the Camp was opened up to girls and the numbers steadily rose to around 300. Today the Camp is held at Braithwaite with around 160 campers each year.